From 2010      CNRS Researcher, Institute of Researches on Catalysis and Environment of Lyon (IRCELYON), Lyon 1 University, France.

2006                Member of the local organization committee of the first day of communications of the PhD students from Strasbourg University, May 4, 2006, Strasbourg, France.

From 2016       Secretary-elect of the Council of the Institute of IRCELYON, France.

2007 – 2008    In charge of the X-Ray crystallography single crystal beamline at the Advanced Light Source at Lawrence Berkeley National Lab for the department of Chemistry.

2004 – 2006    President of the Young Chemists Club, Alsace section, of the French Chemistry Society.

2004 – 2006    Representative of the non-permanent staff at the Council of the Institute of IPCMS, France.

Aude Demessence is a CNRS researcher working at the Institute of Catalysis and Environment of Lyon at University of Lyon, France. She obtained her phD in 2006 from University of Strasbourg, France, on magnetic and luminescent hybrid materials under the supervision of Dr. P. Rabu. Then, she spent two years at Berkeley University, USA, in the group of Pr. J. R. Long as a first postdoctoral fellow, where she started to work on porous and flexible Metal-Organic Frameworks for gas adsorption. Her second postdoctoral position was done jointly at Versailles and Paris Universities with Dr. C. Serre and Dr. C. Sanchez to elaborate thin films of MOFs. From her recruitment by CNRS in 2010, Aude is developing her research on self-assembly of gold nanoparticles for catalysis thanks to a young researcher grant (ANR JCJC) and also on Metal-Organic Chalcogenolate coordination polymers for their photoluminescence (ANR/JST on Molecular Technology). She obtained a JSPS short term fellow in 2014 and spent two months in Pr. S. Kitagawa lab. She also visited for 3 months, in 2015, the Department of Chemistry led by Pr. R. Murugavel at IIT-Bombai, India.

The research mainly focuses on the synthesis and characterizations of gold and silver thiolate hybrid materials for heterogeneous catalysis and physical properties. The goal is to develop in parallel gold and silver thiolate coordination polymers, oligomers and atomically well-defined clusters in order to link the molecular chemistry and the nanoscience involved in these derivates and understand the formation and structure of functionalized nanoparticles in general and their assembly. 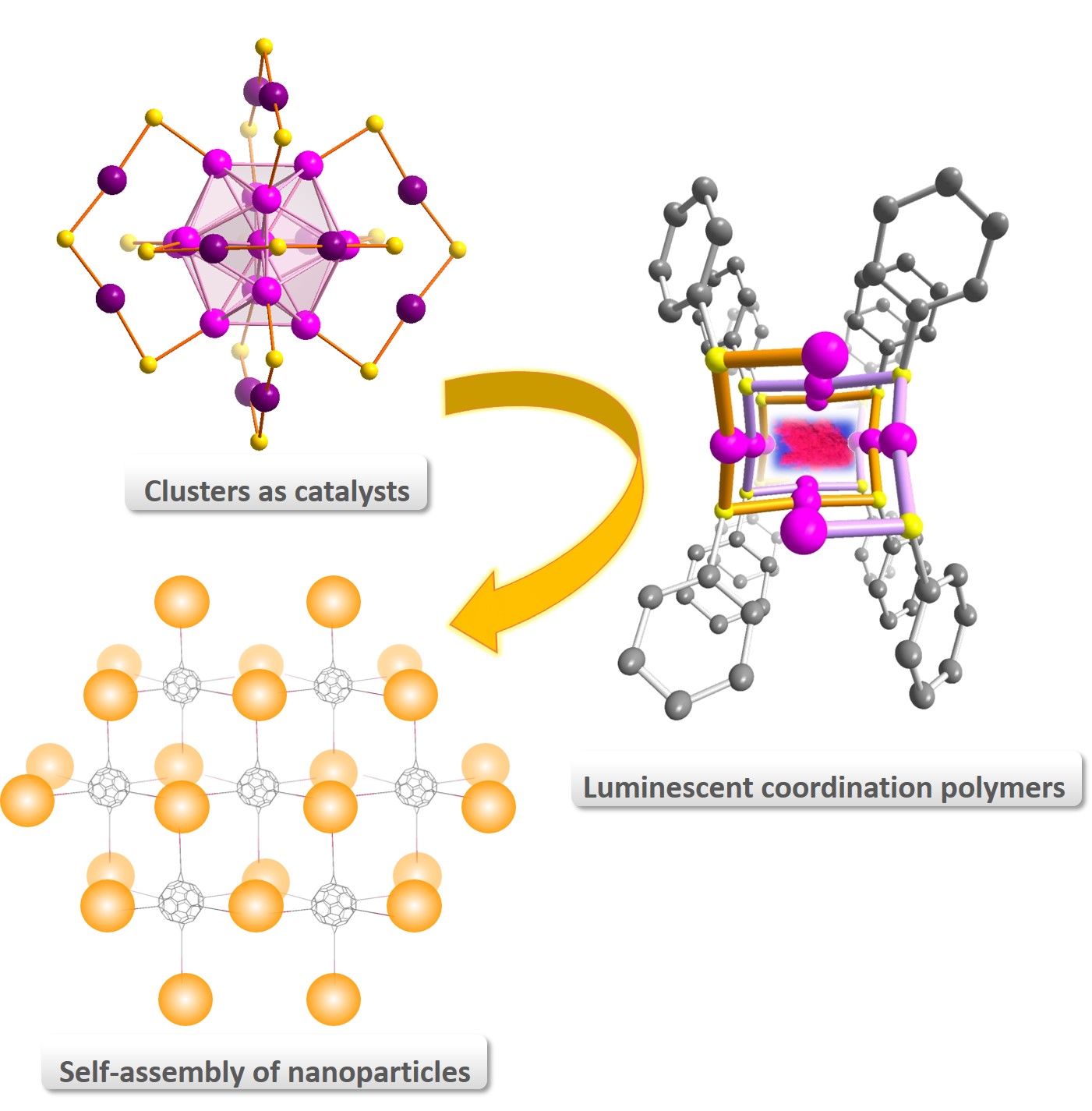 Figure 1 - General outline of our research program. We explore the possibility of designing tridimensional functional hybrid materials from coupling the nanoscience of atomically well-defined building-blocks and the molecular chemistry of self-assembled coordination polymers. The goals are to develop new catalysts, novel structures of photoluminescent materials and understand the formation of functionalized nanoparticles and their assembly.

Self-assembly of nanoparticles through organic linkers

Development of new catalysts to improve industrially important chemical reactions in terms of activity and selectivity, in environmentally more acceptable means and economical matter is one of the most important needs in research. Heterogeneous catalysis has shown its potential over the last years with the discovery of new catalysts easy to separate from the reaction medium. Today, nanoparticles are considered as the most exciting materials in heterogeneous catalysis due to their high surface/volume ratio allowing for a high numbers of catalytically active sites. Nevertheless, the main problem associated with the use of nanoparticles-based catalysts is their dispersion. When particles form stable colloidal solution, they show good activity and dispersion, but once exhausted, they are difficult to regenerate. In contrast, when nanoparticles are immobilized on a support they are easier to regenerate and still remain in a dispersed state, but these composites exhibit a lower accessible surface area, due to the support, that thus limits their inherent effectivity and in general the support effect is not negligible.

To overcome these limitations, we develop new nanostructured materials by using the concept of self-assembly of nanoparticles directed by organic linkers to generate multifunctional hybrid materials with a high number of catalytic centers. To connect gold nanoparticles and prevent their aggregation, we use voluminous linkers, such as the functionalized hexa-adduct fullerenes as 3D rigid and defined nodes. 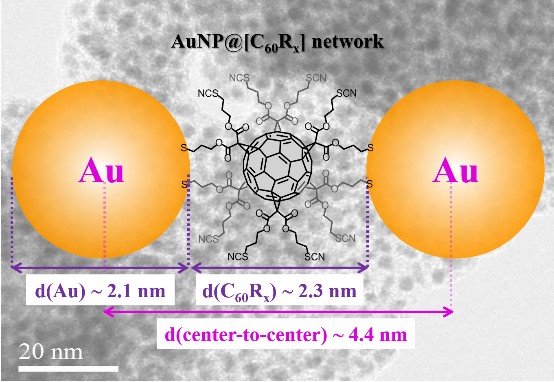 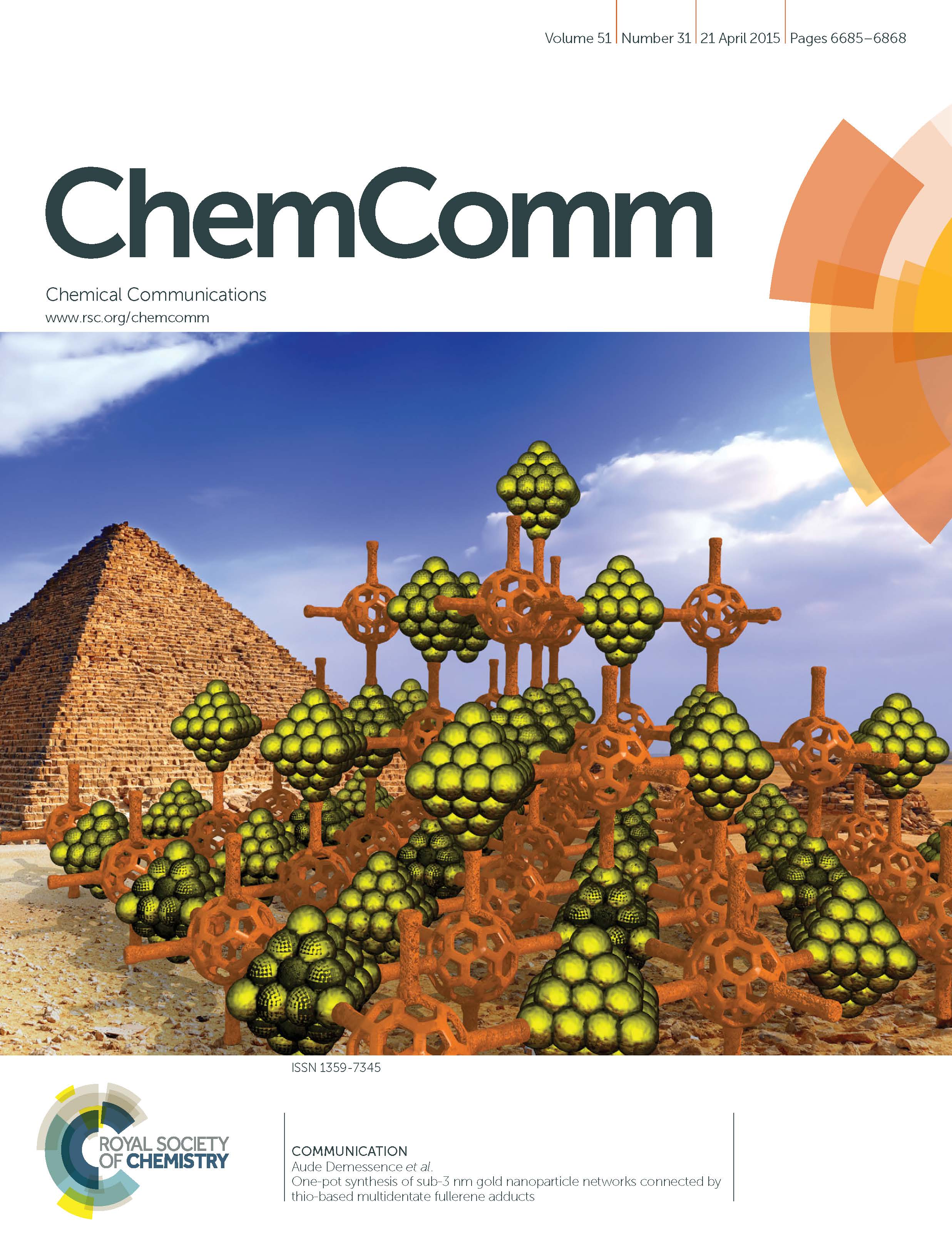 Figure 2 - Schemes of the connection of gold nanoparticles through hexaadduct fullerenes with the associated cover publised in Chemical Communication journal.

Gold nanoparticles exhibit a catalytic activity in many chemical processes. Most of the reactions are size-dependant, i. e. the specific activity depends on the average gold particle size. Generally, the activity increases when the particle size decreases, with a marked increase below 5 nm. But for sub-2 nm particles, the origin of the catalytic power is still unclear and under intense debate. Fundamental investigations on the structure-catalytic activity relationships still lag behind, partly due to the polydispersity issue of gold nanoparticles which precludes the in-depth understanding of the origin of this size dependence.

Recently, atomically well-defined thiolate-capped Au nanoclusters (denoted as Aun(SR)m) have been successfully isolated and these monodispersed functionalized clusters, with gold core between 1-2 nm, hold promises as a new generation of catalysts. More importantly, these nanoclusters permit in-depth studies on the subtle correlation of structure and catalytic activity, since they are atomically and crystallographically well-defined.

To investigate the influence of the size, the type of ligands at the surface and also the support effect, we are working with different functionalized nanoclusters and various supports. Catalytic activity for the oxidation of alkene and alcohol derivatives of these colloidal or supported clusters are investigated. Depending on the aerobic oxidation reactions the presence of the surrounded thiolate ligands can improve the activity and selectivity of the catalyst or prevent the reaction and need to be removed to get activity. 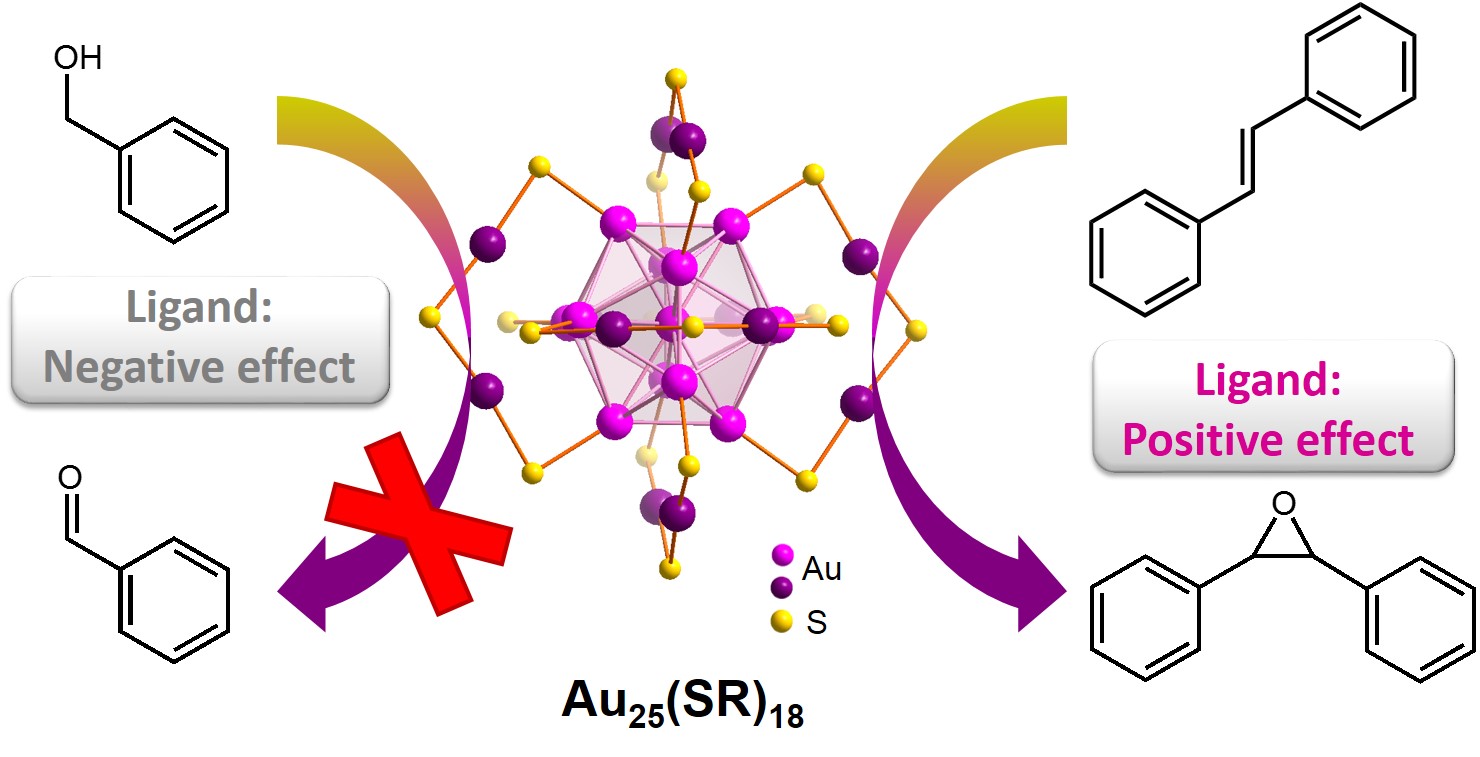 Polynuclear hybrid Au(I) compounds exhibit a very large domain of applications such as electronic devices, contrast agents, sensors or photocatalysts. All these applications are related to the ability of gold(I) to form aurophilic interactions which gives luminescent materials. Among gold species, thiolate gold(I) compounds are an important class of materials due to the high affinity of gold for sulfur that can generate molecular complexes, extended polymers, stabilized gold nanoparticles or SAM. Thus in nanoscience, thiolate gold(I) polymers are a key step in the Brust synthesis of functionalized gold nanoparticles. However relatively little is known about the relationship between the structure of the Au(I)-SR intermediates and the formation of the nanoparticles and the luminescence of thiolate gold nanoclusters. So to understand the photoluminescence and the formation of gold clusters, we study the synthesis and and carry out the structure resolutions by powder X-Ray diffraction of series of [Au(I)-SR]n coordination polymers. We demonstrate that depending on the substituents of the thiolate ligands different structures are obtained (lamellar, helicoidal or cyclic) with various luminescent properties governed by Au-Au distances and gold atom environments. In addition some of these coordination polymers exhibit rare solid-state phase transitions from amorphous to crystalline states. 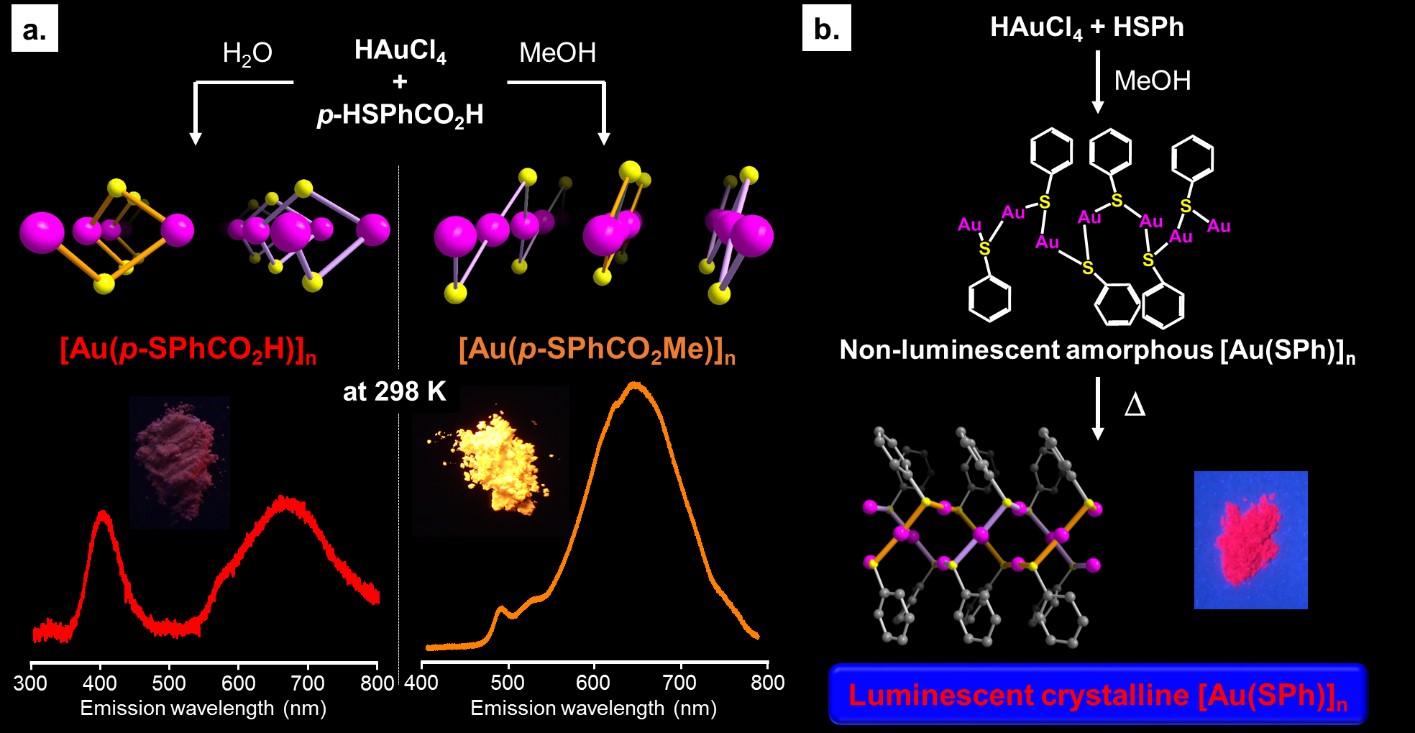 Figure 4 – Different structures and photophysical properties of [Au(SR)]n coordination polymers. a. Compounds [Au(p-SPhCO2X]n (X = H et Me) obtained in different solvent. b. Solid-state phase transition from amorphous to crystalline of [Au(SPh)]n compound associated with the apparition of luminescence.