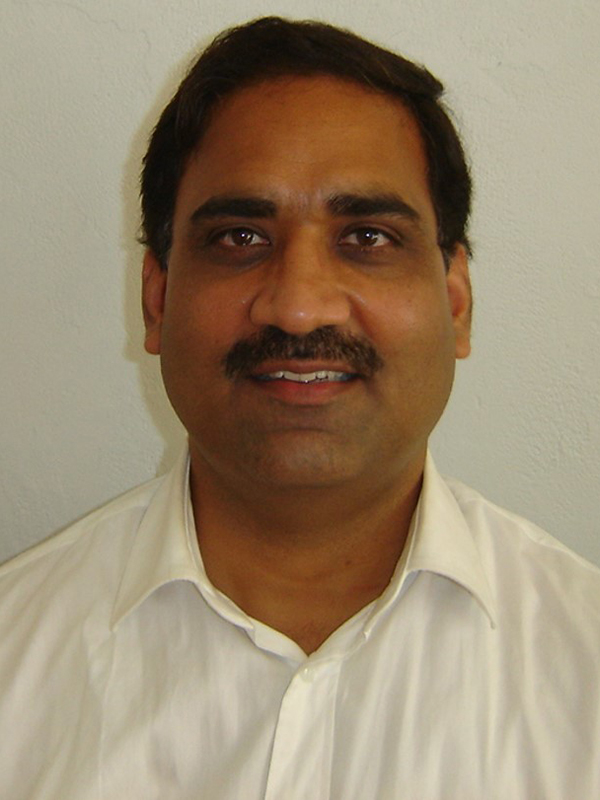 Shashank Mishra is Assistant Professor of Chemistry (Maitre de conférences) at the Claude Bernard University of Lyon1 (UCBL), France. His re­se­arch in­te­rests are concerned with different fa­cets of inorganic and metal-organic chemistry with special focus on design of molecular precursors for oxide and nonoxide nanostructured materials and understanding their transformations via solutions or vapor phase routes for different applications (optics, energy, catalysis, ...). He also focuses on inorganic-organic hybrid materials for di­ver­si­fied ap­p­li­ca­ti­ons. He has published, mostly independently, over 50 research papers in peer-reviewed international journals (total impact factor over 200), and 5 review articles/contributions to books. 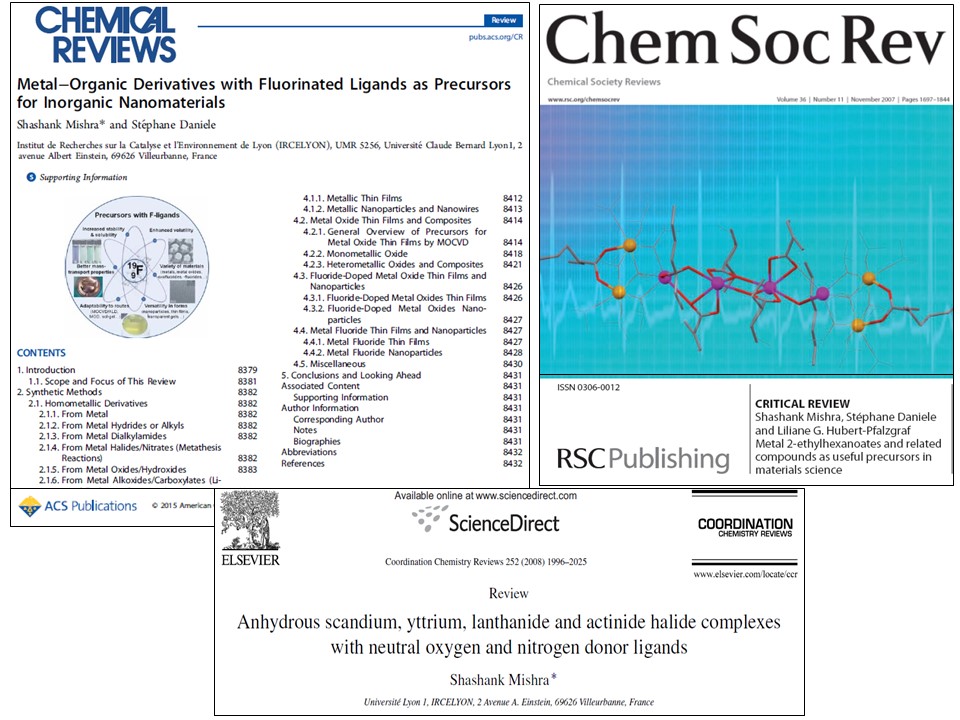 (a) Nanostructured metal oxides and their nanocomposites

The versatility of metal alkoxides as convenient precursors to advanced materials via sol-gel process is widely acclaimed. Heterometallic species are a means to provide homogeneity at molecular level. I have developed new, very convenient and easy-to-scale up routes to synthesize novel homo- and heterometallic alkoxides as ‘single-source precursors’ to get nanostructured metal oxides and their nanocomposites for several applications. These include:

(i) Novel heteroleptic heterobimetallic alkoxide complexes as facile single source precursors for Nb5+/Ta5+ doped TiO2-SnO2 nanoparticles for thermoelectricity: Thermoelectric materials, which convert thermal energy into electric energy, have attracted a renewed interest over the past decade, thanks to the discovery of some new thermoelectric materials with high values of the thermoelectric figure-of-merit (zT). The TiO2-SnO2 system is very attractive as a possible candidate for oxide thermoelectric materials because not only a variety of stable nanostructures with low thermal conductivity can be reproduced in this system but it is also free from toxic or precious elements. However, the band gaps of rutile TiO2 (~3.0 eV) and SnO2 (~3.6 eV) are too large to meet the requirements for good thermoelectrics. In addition, SnO2-based systems are difficult to be sintered to high density due to the predominance of non densifying transport mechanisms. As a consequence, the classical approach of mixing equimolar TiO2 and SnO2 (nano)powders gives rise to porous ceramic with low mechanical strength, which would be problematic for the thermoelectric properties. While the electrical conductivity can be improved by doping this system with cations such as Nb5+/Ta5+ or by heat treatment in reducing atmosphere, an improved densification can be achieved by intimate mixing of constituent elements at atomic level. I, therefore, synthesized novel molecular precursors for above materials by using a new, very convenient route of mixing a metal halide and metal alkoxide in a hydrocarbon solvent. The resulting complexes of the type [MSnCl4(OR)x(ROH)y] (M = Ti, Nb, Ta; x = 4, 5; y = 0-2; R = Et, Pri), which have simple addition molecular compositions and structures, are the first example of its kind (Scheme 1). The Ti-Sn heterometallics were then employed as sol-gel precursors to get Ti0.5Sn0.5O2 nanoparticles, without forming the undesired pure SnO2 grains. While the use of single source precursors ensured homogeneous doping of the Nb5+ /Ta5+ ion in the TiO2-SnO2 matrix, the conventional sintering led to a less than desired density of the TiO2-SnO2 matrix (62%). To improve the density, we then used Spark Plasma Sintering (SPS) technique, which allowed the formation of highly dense and nanostructured spinodal form of TiO2-SnO2. Impacts of the pressure, heating rate and soaking time of SPS process onto the densification and the nanostructuration of the pellets have been studied. 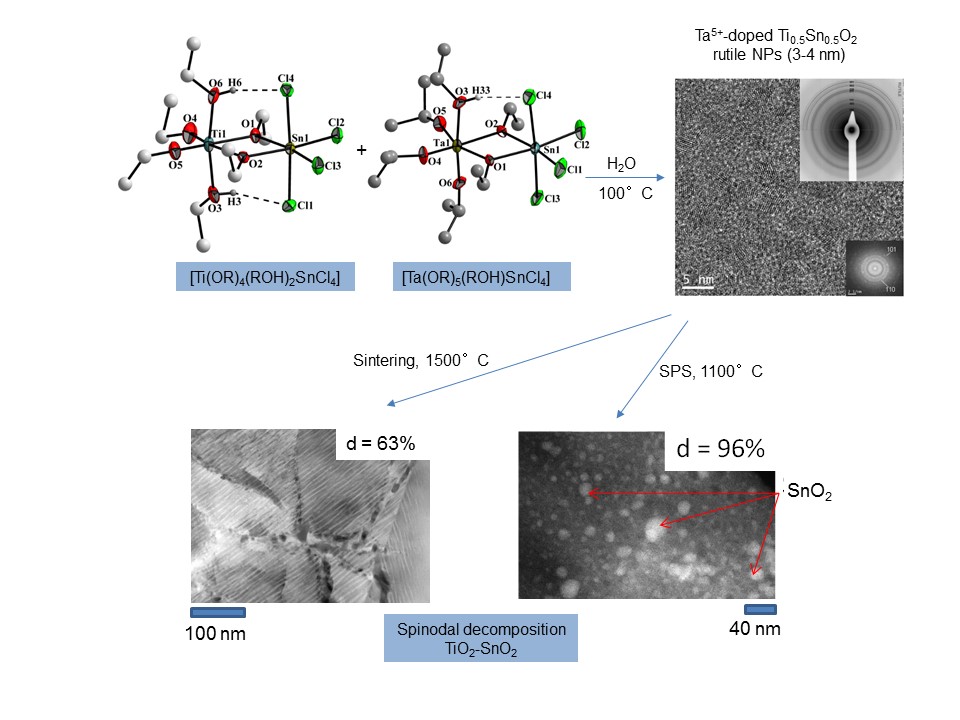 (ii) New homo- and heterometallic aminoalkoxides of group 13 metals as sol-gel precursors for (mixed) metal oxides as high surface area support for gold catalysts: Mono- and multimetallic oxides of group 13 metals cover a wide range of electronic, optical and catalytic properties. In particular, mixed metal oxides having the spinel-type structure are often advantageous over binary oxides with regard to catalytic performance, life-time and resistance to sintering. The homoleptic [M4(μ-η3:η1-mdea)6]·xCHCl3 and heteroleptic [M6Cl6{(μ-mdea}6]·xCHCl3 (M = Ga, In, Fe; mdeaH2 = N-methyl diethanolamine; x = 0, 2, 4 or 6) complexes were synthesized as sol-gel precursors to group 13 metal oxide nanomaterials, the latter derivative being used as a synthon to obtain first structurally characterized group 13 heterometallic alkoxide [Al4Ga2(O)2(OPri)10(mdea)2] by metathesis reaction. Depending upon synthetic procedures employed and crystallization conditions, the homoleptic derivative [M4{(OC2H4)2NMe}6] could be crystallized in two isomeric forms: a chair-shaped and a star-shaped. Various sol-gel processing parameters such as solvent, concentration and hydrolysis ratio (h) were studied in order to stabilize nano-sized colloidal suspensions for access to thin films by spin coating. These binary and ternary group 13 metal oxides were subsequently used as high surface area support for the deposition of gold nanoparticles of sub-5 nm size to form effective catalytic systems for the aerobic trans-stilbene epoxidation reactions. The Au/In2O3 was the most active catalyst of the series but Au/Ga2O3 catalysts were more selective, Au/β-Ga2O3 being the best (85-90% selectivity for t-stilbene oxide in the beginning of the reaction, Scheme 2). The selectivity of all these homometallic Au/M2O3 (M = Ga, In) catalysts decreased considerably as the reaction progresses while the selectivity of the heterometallic Au/Al4Ga2O9 catalysts remained stable. In addition to influencing mass-transfers, the support affected the selectivity of the gold-catalyzed aerobic epoxidation of stilbene in methylcyclohexane. 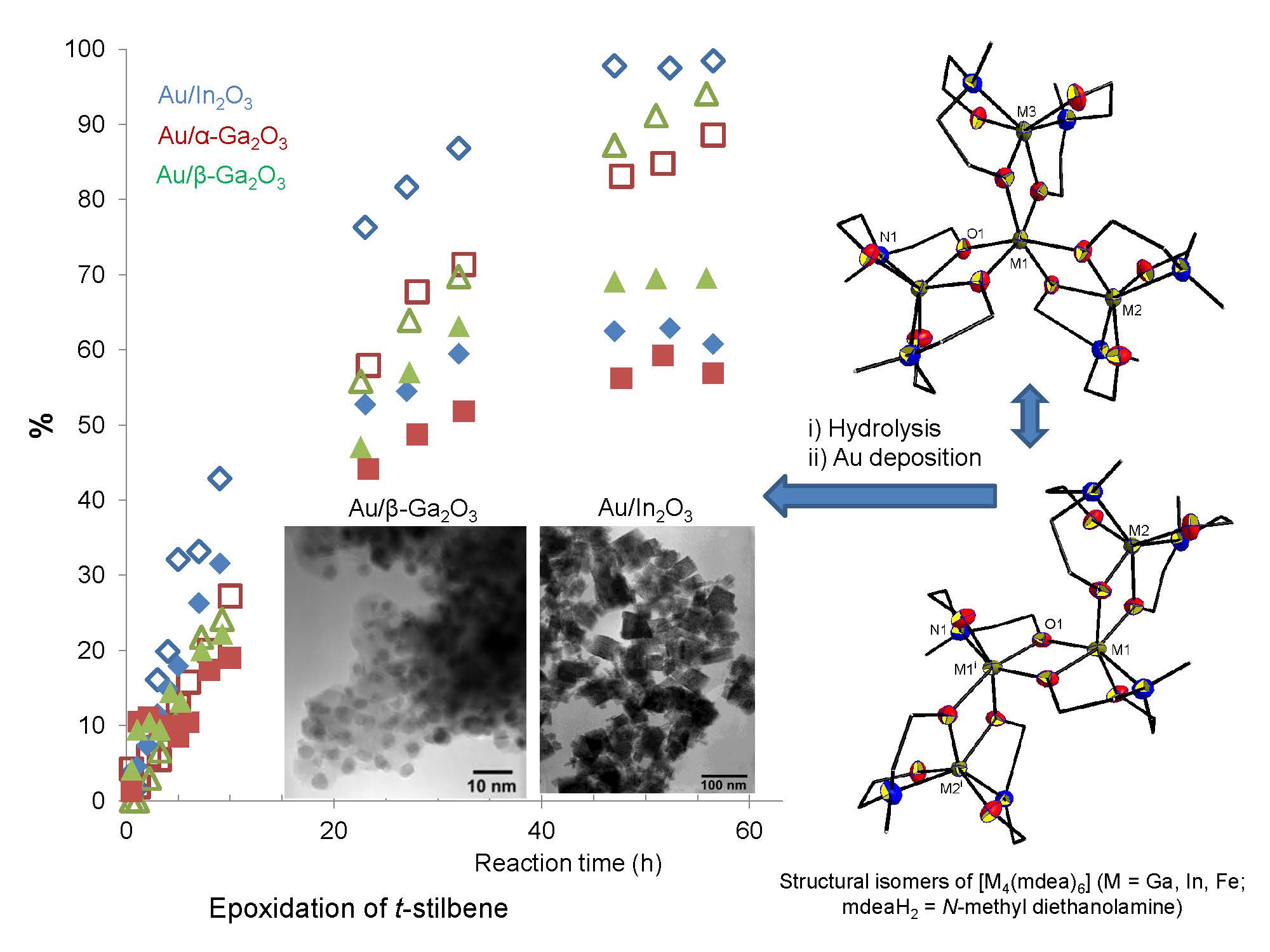 Novel Na-Y(Ln) heterometal-organic complexes as first single source precursors for up-converting NaYF4:Yb3+, Er3+/Tm3+ nanocrystals and thin films: The up-converting nano-fluorescent materials that convert near infrared (NIR) to visible light have attracted tremendous attention recently. We have developed first heterometal-organic single source precursors for NaY(Ln)F4 up-converting nanomaterials. These novel Na-Ln heterobimetallic trifluoroacetate derivatives (Ln = Y, Gd, Er, Tm and Yb) are advantageous in terms of being anhydrous and having lower decomposition temperature in comparison to the homometallic Ln(TFA)3(H2O)3, the only used precursor for chemical routes so far. In addition, they also contain chelating glyme ligands, which act as capping reagents during decomposition to control the NaY(Ln)F4 particle size and render them monodisperse in organic solvents. Their decomposition in 1-octadecene gave NaY(Gd)F4 nanocrystals with controlled size and desirable dispersibility in organic media. Interestingly, the isostructural [NaY(TFA)4(diglyme)] and [NaGd(TFA)4(diglyme)] showed different decomposition patterns. While the latter decomposed at 285°C to give directly the hexagonal NaGdF4 NCs, a phase many folds more efficient than the cubic phase for the upconversion process, the yttrium analogue afforded only a mixture of the cubic and hexagonal phases of NaYF4, in a relative ratio that depended on the reaction temperature. We attributed this difference in the decomposition pattern to the different ionic radii of the two metal cations Y3+ (r = 0.89 Å) and Gd3+ (r = 0.94 Å), which would influence the free energy of the NaLnF4 system. Surface modification of these NCs by ligand exchange reactions with Poly Acrylic Acid (PAA) and polyethyleneglycol diacid 600 was carried out to render them water soluble. The multicolour upconversion fluoroscence was  successfully realized in the Yb3+/Er3+ (green/red) and Yb3+/Tm3+ (blue/violet) co-doped NaYF4 NCs and thin films, demonstrating that these are promising UC nanophosphors of immense practical interest. We have also developed designed precursors for scintillating CeF3 and upconverting Ln3+-doped GdF3 nanoparticles.

Near-infrared driven photocatalysis of the nanocomposites TiO2: NaGdF4:Yb3+,Tm3+: TiO2 is one of the most promising photocatalysts. However, a band gap of 3.2 eV limits the application of TiO2 only in the UV region (<398 nm), leaving a large amount of the solar energy being unused. Although several attempts have been made to extend the absorption range of TiO2 into the visible region, not much work has been devoted to extend the absorption range of TiO2 into the IR region of sunlight, which accounts for almost half of the energy of the sunlight radiation (as against only about 5% of the UV radiation). We have used the upconverting NaGdF4:Yb3+,Tm3+ NCs to prepare core-shell TiO2@NaGdF4:Yb3+,Tm3+ photocatalyst where the core NaGdF4:Yb3+,Tm3+ acts as a medium to convert NIR to UV-visible light via multiphoton upconversion processes. The prepared photocatalysts showed sufficient degradation of the methylene blue (MB) dye, both in laser and light conditions, thus validating the concept of transferring the NIR into the visible light to activate the anatase TiO2 for the photocatalysis. 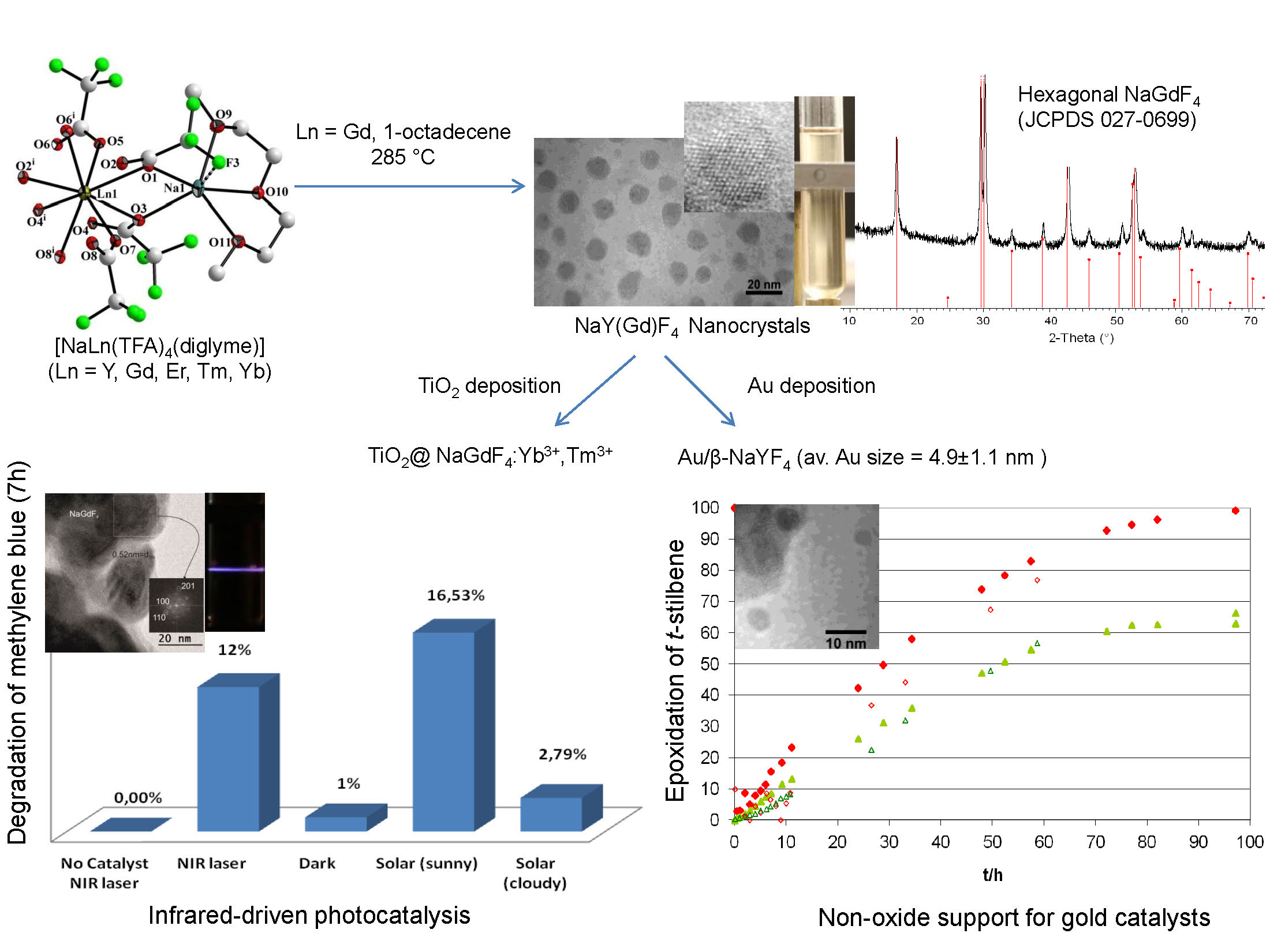 Selenoether complexes as facile precursors for metal selenide nanoparticles and thin films: Enhanced photocatalytic activity of TiO2-Ag2Se nanocomposites under UV light The coordination chemistry of several metal slats including halides of copper, gallium and indium with the simple dielkyl selenoether was investigated with the aim to use the resulting complexes as precursors for selenium-containing chalcopyrite semiconducting materials. These easy-to-synthesize anhydrous precursors show good solubility in organic solvents and are decomposed easily to metal selenide nanoparticles or uniform thin films on substrates at low temperatures with no evidence for significant carbon contamination. We have also developed a facile and direct synthetic route for metal selenide nanoparticles at room temperature. The synthesis of Ag2Se NPs in the presence of commercial TiO2 (P25) allowed the preparation of Ag2Se-TiO2 nanocomposites with different Ag/Ti ratios, which exhibited excellent photocatalytic activity for the degradation of formic acid under UV light irradiation, the best results being for 0.13%Ag2Se-TiO2 nanocomposite which degraded 50 ppm of formic acid in 30 min.

2. Hybrid materials based on solvated lanthanide/barium cations and iodometallate anions showing interesting solid and solution phase transformations:   The fact that the soft and bigger iodide anion in lanthanide/barium iodides undergoes auto-ionization in the presence of many coordinating solvents, and hence can be exploited for the construction of interesting iodometalate fabrics if a suitable iodide abstractor is used, formed the basis of this synthetic approach. The selection of CuI and AgI was inspired by the possibility to substitute MO4 building blocks in zeolite with MX4 (M = Cu, Ag; X = Cl, Br, I) tetrahedra, where the cupro- and argentophilic M(I)···M(I) interaction is expected to play a role to sustain the framework structures and, thus, provide a foundation for the new developments in zeolite type functional materials (halozeotype materials). Several of the hybrids synthesized here undergo interesting solid- and solution phase transformations on introducing a systematic substitution of the coordinating ligands in metal-organic cation and/or via condensation of iodometallate anions.

Template properties for constructing rare heterotrimetallic hybrids: We have recently shown that these hybrid iodometallates can serve, in general, as a template for constructing unique metal-organic incorporated heterometallic iodometallates containing three different metals. Not only that, they also have structure-directing effect. As a general trend, the basic structure of metal-organic containing halometallates is retained when a tetrahedral MI4 or a trigonal co-planar MI3 unit is replaced by another M'I4/M'I3 unit. On the contrary, replacing a MI4/MI3 unit with octahedral M'I6 unit leads to a breakdown in the structure-directing properties of these iodometallates due to compulsory molecular rearrangement required.

Luminescent and semiconducting properties: Many of these hybrids have interesting luminescent properties and show vivid and intense fluorescence when exposed to UV light. In particular, the compound [Ba(triglyme)2(acetone)2][Cu4I6] shows a quantum yield of 69%, which makes it one of the most highly luminescent copper iodide clusters known so far. In most cases, these emissions could be attributed to the Cluster-Centered (CC) emission deriving from mixed iodide-to-metal charge transfer (XMCT) and ds/dp metal centered (MC) excited states. In some other cases, the luminescence is originated from the metallic centre of the metal-organic cation. For example, the hybrids with solvated terbium(III) cation show interesting luminescent properties where high energy transitions in the excitation spectra are quenched due to the presence of iodometallate moiety. These fascinating complexes were further evaluated as potential candidates for semiconducting (e.g., diffuse-reflectance spectra of iodoplumbate and –bismuthate derivatives show optical band gap in the range of 1.86-2.54 eV) and magnetic properties. 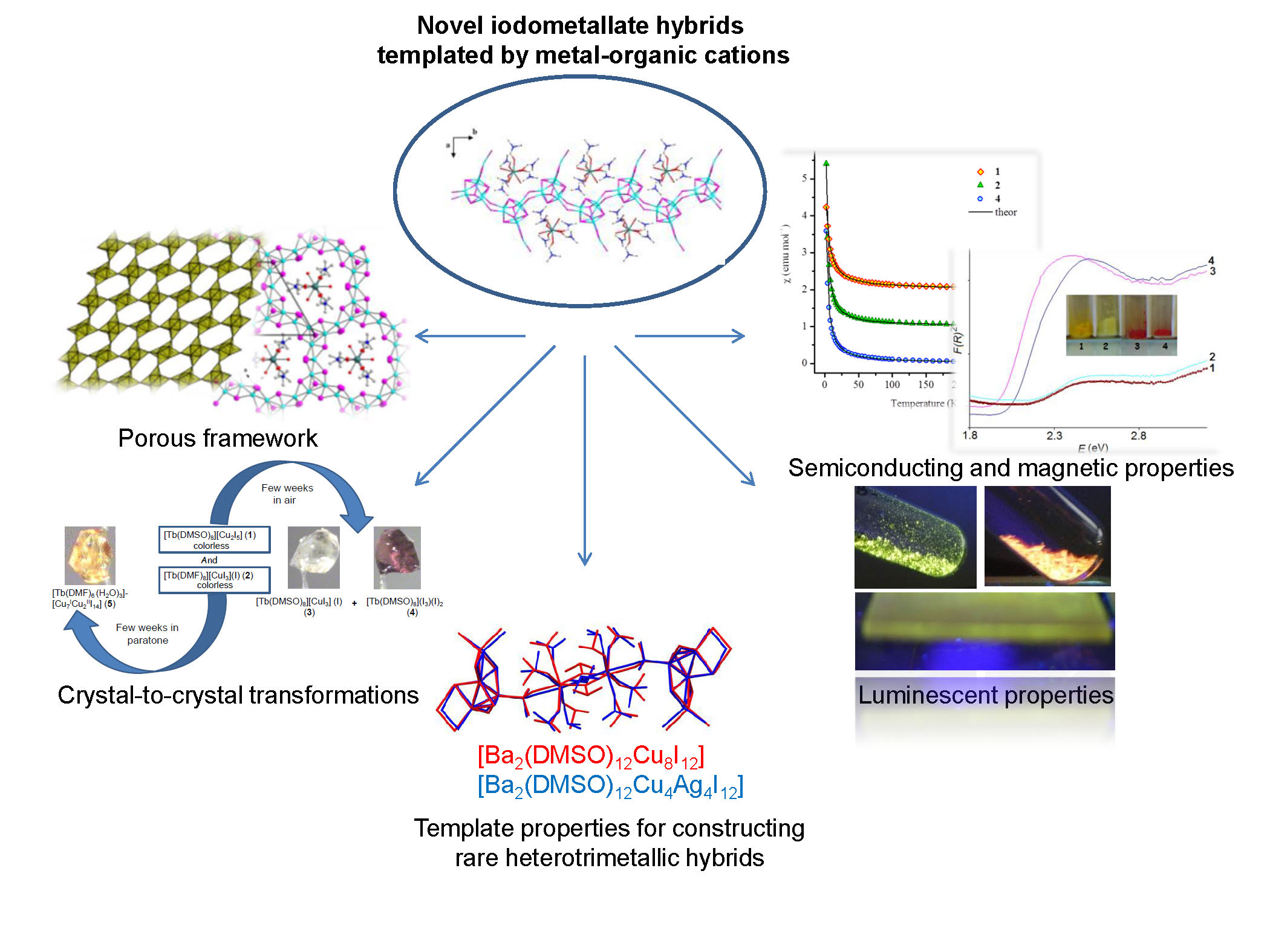 Molecular engineering: Designing an ideal precursor, which must possess several properties, is a significant challenge. The synthesis of these precursors requires demanding skills as it involves handling of highly air- and moisture-sensitive reagents. I have developed several new precursors with significantly improved physical properties and decomposition characteristics, particularly for oxides, fluorides and selenides nanomaterials. 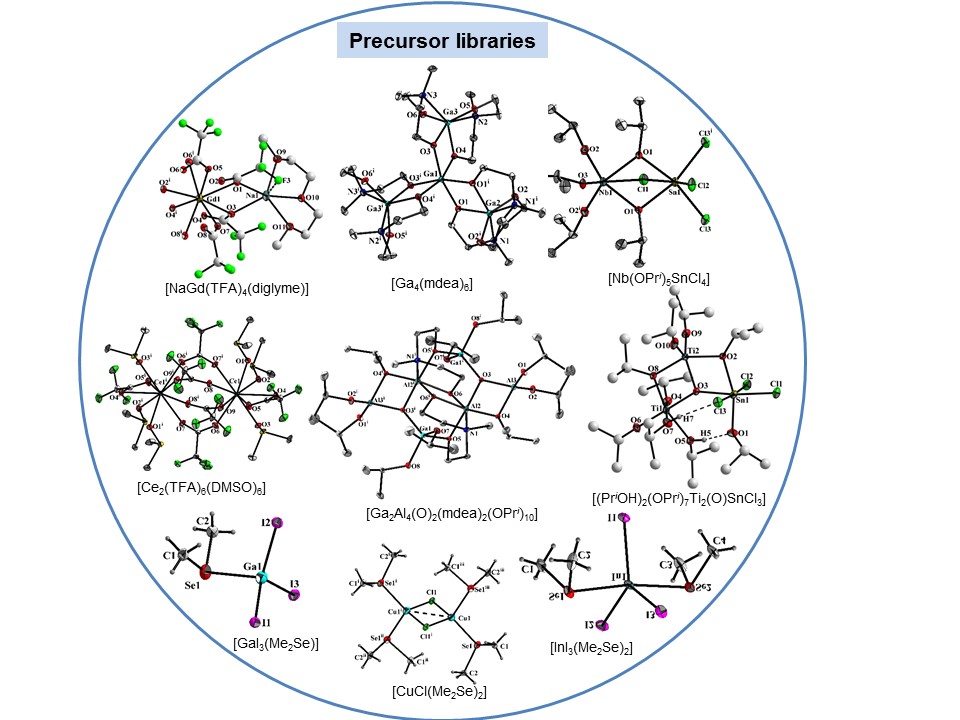 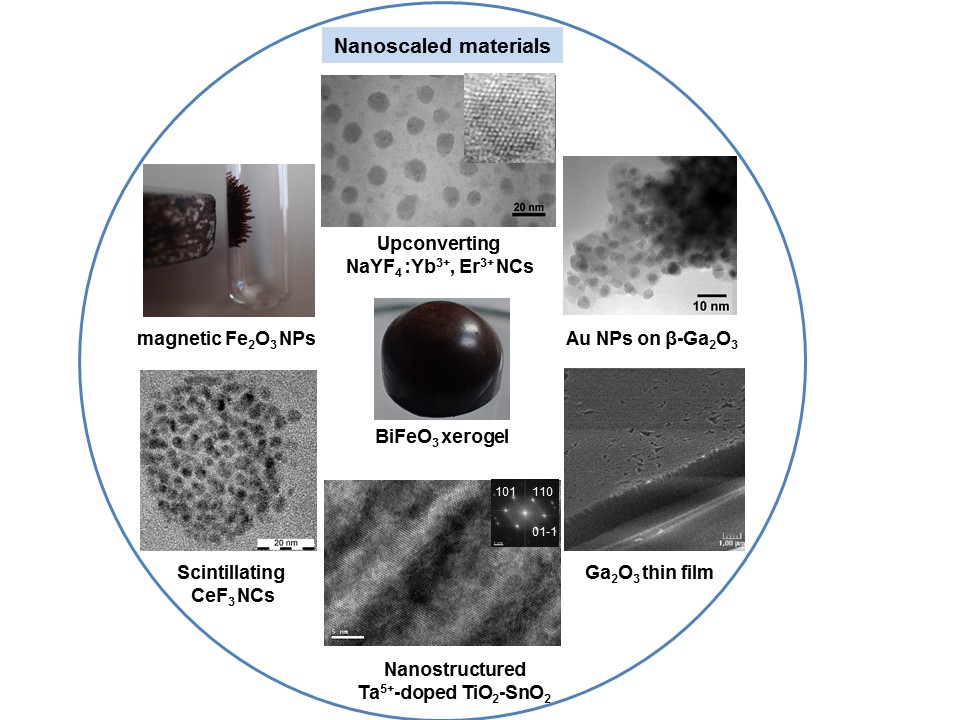 TEACHING DISCIPLINES: Theory and tutorial classes at post- and under graduate levels on general inorganic, coordination and organometallic chemistry as well as inorganic nanomaterials.